Transit hubs in the New York area have long been catalysts for the growth of their surrounding neighborhoods, and the shared economy of the NY & NJ urban core. Five terminals were constructed along the New Jersey shore of the Hudson River during the rail boom of the late 19th Century: Weehawken Terminal, Hoboken Terminal, Pavonia Terminal, Exchange Place, and Communipaw Terminal.

Just like its northeasterly neighbor, Penn Station was the capstone of an ambitious project to dramatically improve passenger access to Midtown. In 1910, the newly-built North River Tunnels connecting New Jersey and New York opened for service, bringing rail passengers directly into Manhattan for the first time. Designed by noted architecture firm McKim, Mead, and White in the style of the ancient Roman baths of Caracalla, Penn Station was intended to be the Pennsylvania Railroad’s grand gateway to America’s largest city, and helped Midtown surpass Lower Manhattan as the city’s largest central business district.

Sam Roberts, urban affairs correspondent for The New York Times, describes the scope of the project in his book, Grand Central: How a Train Station Transformed America:

Absent the smothering smoke, soot and cinders, the depot could be expanded on the same footprint by delivering trains to platforms on two levels, the lower for suburban commuters and the upper for long-distance trains. For the first time, the entire rail yard all the way to 56th Street, to where the maze of rails that delivered passengers to the platforms coalesced into four main-line tracks, could be decked over. The “veritable ‘Chinese Wall’ ” that bisected the city for 14 blocks could be eliminated. The air above the yards could be magically transformed into valuable real estate in the heart of Manhattan. 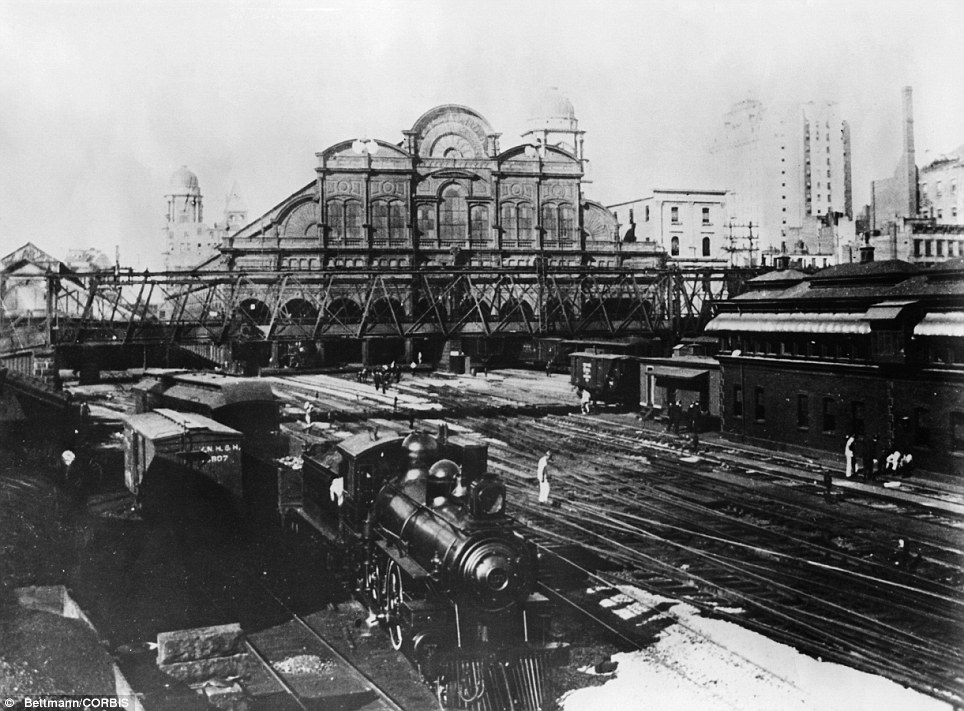 Construction of Grand Central and the new tracks lasted a decade, and the larger neighborhood transformation nearly a decade longer. Christopher Gray paints a vivid picture of the urbane neighborhood that replaced the old yards and stands as one of New York’s most durable transit-oriented developments:

In the next 20 years, Mr. Wilgus’s plan remade the dozen or so blocks north of the terminal. The Biltmore was the best known, 26 stories high but set back along Vanderbilt Avenue to give the terminal breathing room. With no stores on Madison Avenue, a main dining room 120 feet long and a terrace on Vanderbilt, it was a particularly debonair work. Inside, the Palm Court had a timepiece on a wooden screen; ”under the clock at the Biltmore” became a legendary meeting place.

Vanderbilt filled up with structures like the high-rise Yale Club, at 44th and Vanderbilt, and the Roosevelt Hotel, from 45th to 46th. Along Lexington, buildings included the giant Commodore Hotel at 42nd and the streamlined Graybar Building at 44th. 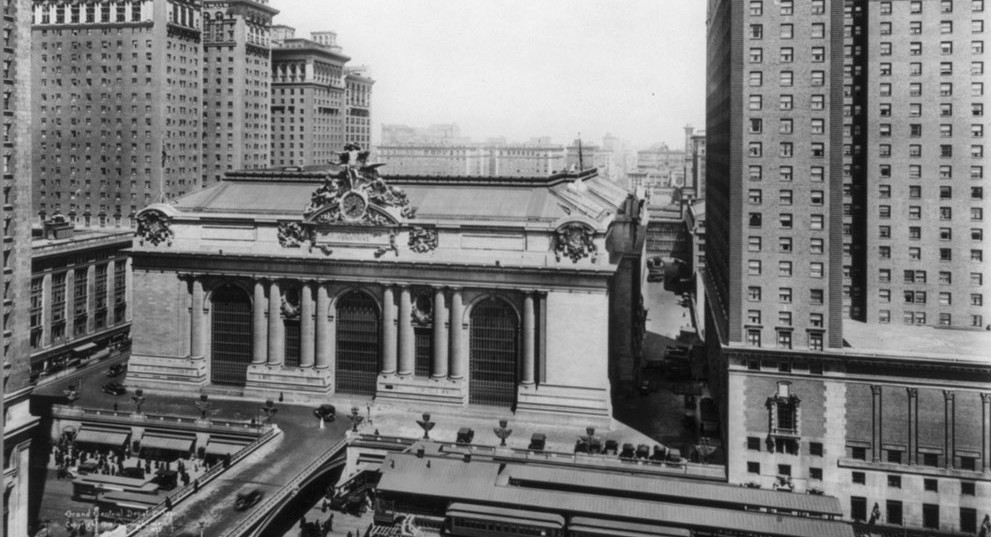 But it was the width of Park Avenue that offered the canvas for a much grander design, something really worthy of the name Terminal City. There were a few commercial buildings, like the New York Central Building, with its signature tower, spanning Park at 46th; and the crisp, cool Postum Building at 250 Park from 46th to 47th.

Hoboken Terminal has been the workhorse west of the Hudson since it opened on February 26, 1907. Designed by Kenneth Murchison in the American Industrial style, it replaced an earlier wooden terminal destroyed by fire in 1905, and was built with Indiana Limestone atop a concrete foundation and pilings to withstand fire and flooding. It was designed to serve as the hub for passenger trains on the Delaware, Lackawanna & Western railroad, Hudson River ferries to Manhattan, and the Public Service railway’s extensive streetcar system in Hoboken and Jersey City. On February 26, 1908, the Hudson & Manhattan railroad (now known as PATH) began subway service between Hoboken Terminal and 19th Street in Manhattan via the newly-completed H&M Tubes. 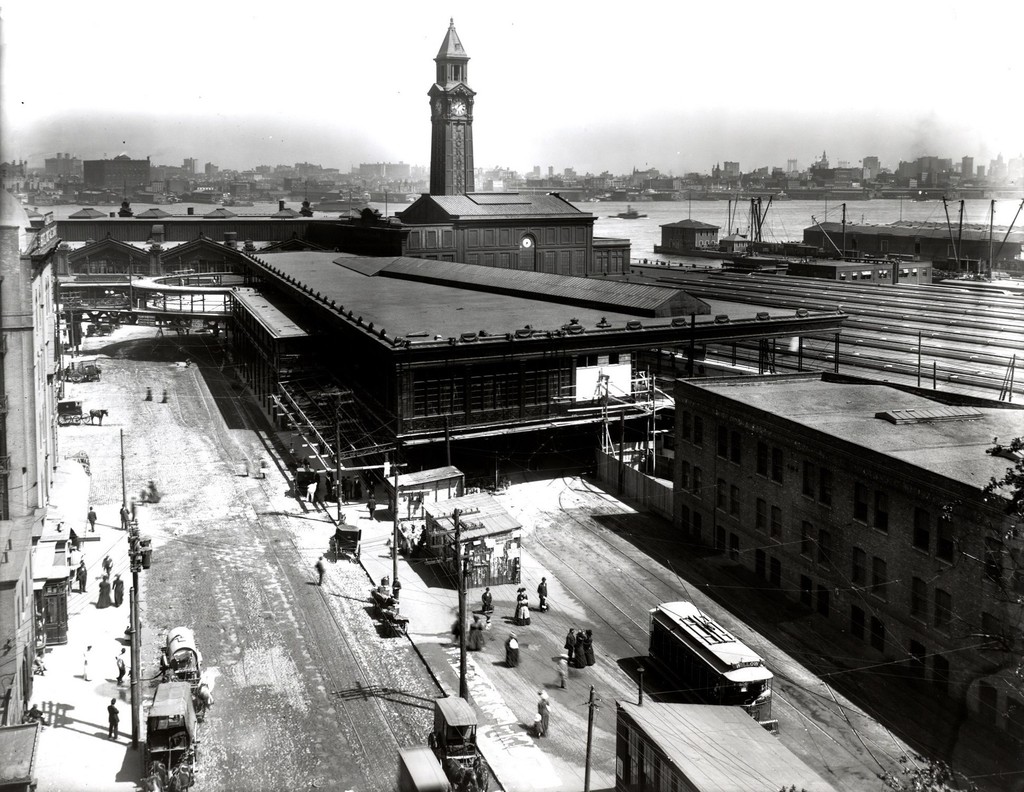 The terminal’s listing in the National Register of Historic Places notes the unique angled design of the complex, intended to promote circulation between the various modes of transit:

The angled plan of the complex appears to be the logical result of Murchison’s intent to “divide access to the ferry between the train passengers and everything and everybody else. “Hence, the ferry [terminal], instead of being sited directly at the end of the terminal tracks, was angled to partially abut the railroad [terminal] while it also opened onto a large forecourt to receive the non-railroad traffic. The result was a layout entirely unique in waterfront terminal design.” The terminals were designed as “two distinct self-sufficient components linked by internal circulation arteries. Each component had a separate entryway at the Plaza.” The angled plan helped to prevent congestion and separate the throngs of passengers moving between the train, the street, the trolley, and the three ferry lines.

Today, it houses five modes of transit: New Jersey Transit regional rail, buses, and Hudson-Bergen light rail, PATH subway, and NY Waterway ferry service. After the decline of the Erie Lackawanna railroad, in the 1970s, Hoboken Terminal and many of EL’s passenger rail routes were transferred to New Jersey Transit, the state-owned public transportation system established in 1979. In 1996, the agency began a 15-year, $174 million restoration of its flagship transit hub. Engineering firm STV Group developed a master plan and led construction of several major projects including renovating the main waiting room, modernizing Yard B, and renovating Hoboken Ferry Terminal for a return to passenger service in 2011 after a 45-year hiatus. The terminal’s iconic clock tower, removed in 1955 because of structural deterioration, was replaced with a replica based on drawings and photographs of the original. Kristin Dispenza describes the work in a 2012 Buildpedia story on the restoration:

Extensive repairs were required for the copper cladding and decorative ironwork. Fiber optic lighting was added above the six arched ferry berths to mimic the original incandescent marquee lighting, and the rooftop “Erie Lackawanna” sign was relit with LED strips similar in appearance to the original neon tubing. Since the original clock tower had been removed due to structural deterioration in the 1950s, the renovation also included rebuilding a 203′ tower, taking inspiration from detailing on the surviving structure. Each stage of the terminal restoration required working with Secretary of the Interior’s standards for historic building modifications, as well as working with the New Jersey Historic Preservation Office, because the building is listed on both the National and New Jersey Registers of Historic Places.

By the mid 1960s, the terminals at Weehawken, Pavonia, and Exchange Place had been demolished. Service at Communipaw was discontinued by 1967 and the former terminal is now part of Liberty State Park. The Pennsylvania Railroad sold the air rights above Penn Station, and the head house was demolished in 1963 to make way for Pennsylvania Plaza, a mixed-use complex containing several office towers and Madison Square Garden. An nymag.com feature article on the saga of the World Trade Center transportation hub noted that the original Penn Station didn’t have the same deeply-intertwined economic development proposition as Grand Central:

Penn Station was torn down,” says Vishaan Chakrabarti, a partner at SHoP Architects and an urban-planning professor at Columbia University, “because the building, beautiful as it was, was a white elephant.

Although the destruction of Penn Station was a major architectural loss for New York, it didn’t lead to the demise of the rail station. Despite being hidden underneath Madison Square Garden, Penn has steadily grown to become the most heavily used train station in North America, and it is still helping the surrounding neighborhood reach new heights with the development of its adjacent rail yards. Hudson Yards is the largest private real estate development in US history, and with construction underway on the first major tower, there is renewed focus on remaking Penn to serve the new mixed-use neighborhood rising on its western flank.

Grand Central was threatened with demolition in 1968 to make way for an office tower. Somewhat ironically, it was saved by the 1963 demolition of of Penn Station. The ensuing preservation movement helped establish the New York City Landmarks Preservation Commission in 1965, and the LPC designated Grand Central a city landmark in 1967. One hundred years after its completion, Grand Central Terminal is widely regarded today as one of the most magnificent civic structures in the city, and continues to be at the center of its neighborhood’s evolution. The Long Island Rail Road’s East Side Access project will add four new platforms and eight tracks to the terminal’s existing 44 platforms and 67 tracks, and bring an estimated 162,000 people to the office towers on the surrounding blocks. 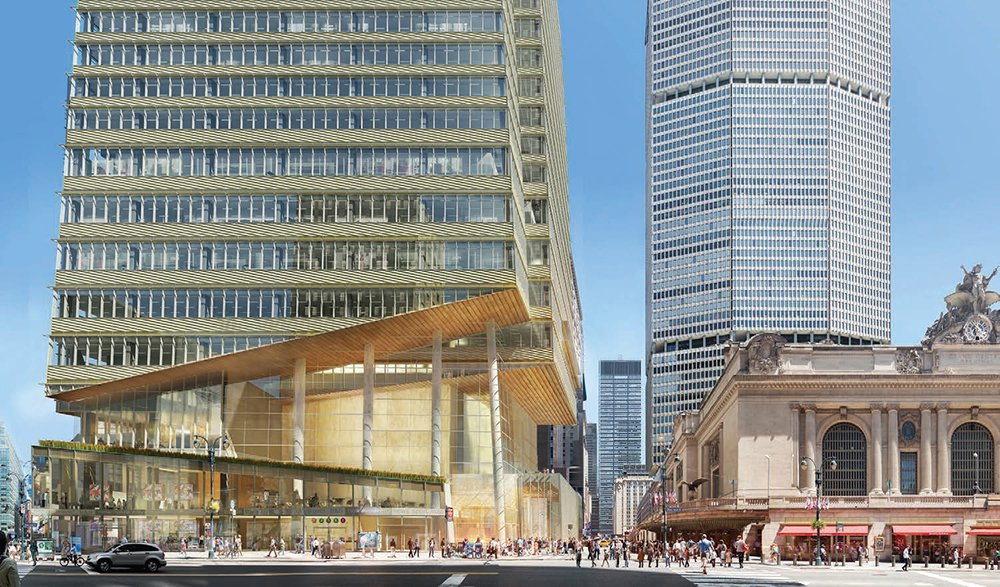 Since the average age of towers in East Midtown is 70 years old, the East Midtown Rezoning would permit new, taller towers to replace aging office space in exchange for pedestrian, public space, and transit improvements. The rezoning has already spurred SL Green Realty Corp., New York’s largest office landlord, to build a 1,500 ft tower across the street from the terminal. When complete, One Vanderbilt will become New York’s third-tallest building, and include $210 million in transit improvements at Grand Central.

In December 2014, the Hoboken City Council voted 8-1 to approve the Hoboken Terminal and Yards Redevelopment.

The City’s revised Plan calls for a baseline 2.176 million square foot mixed use project with an additional 125,000 square feet of commercial space permitted if the commercial space is architecturally creative and designed to LEED Gold standard. Two-thirds of the overall plan is for office space and one-quarter for residential space, with the remainder for retail space. The plan would create a true mixed-use project that will significantly diversify the local economy, support local businesses, and revitalize the Hoboken Terminal area and Observer Highway area – an essential gateway to Hoboken.

For over a century, Grand Central Terminal, Hoboken Terminal, and Penn Station have served as steadfast anchors of New York’s transportation system, and their presence makes the land around them among the most important in the region for transit-oriented development. Each one continues to be at the center of major development plans that are uniquely possible because of their proximity to a major transit hub. Their importance – both to their surrounding neighborhoods and the wider region – demand that major projects like One Vanderbilt, Hudson Yards, and Hoboken Yards are models for sustainable, transit-oriented development that benefits the city and region. 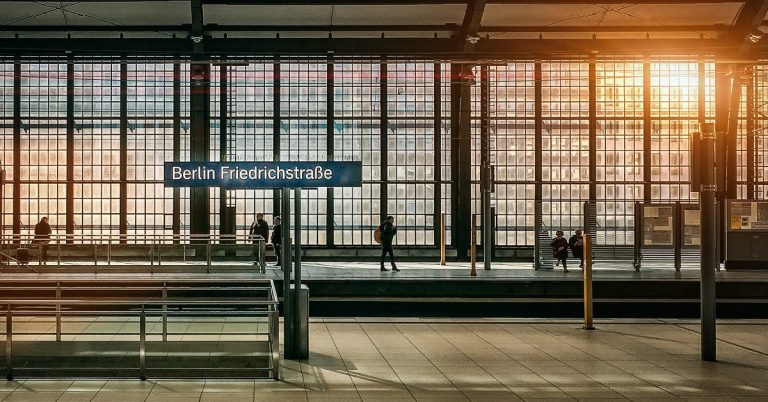 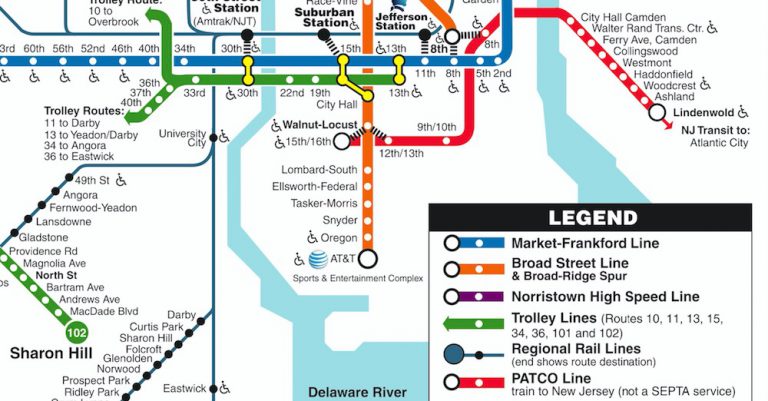