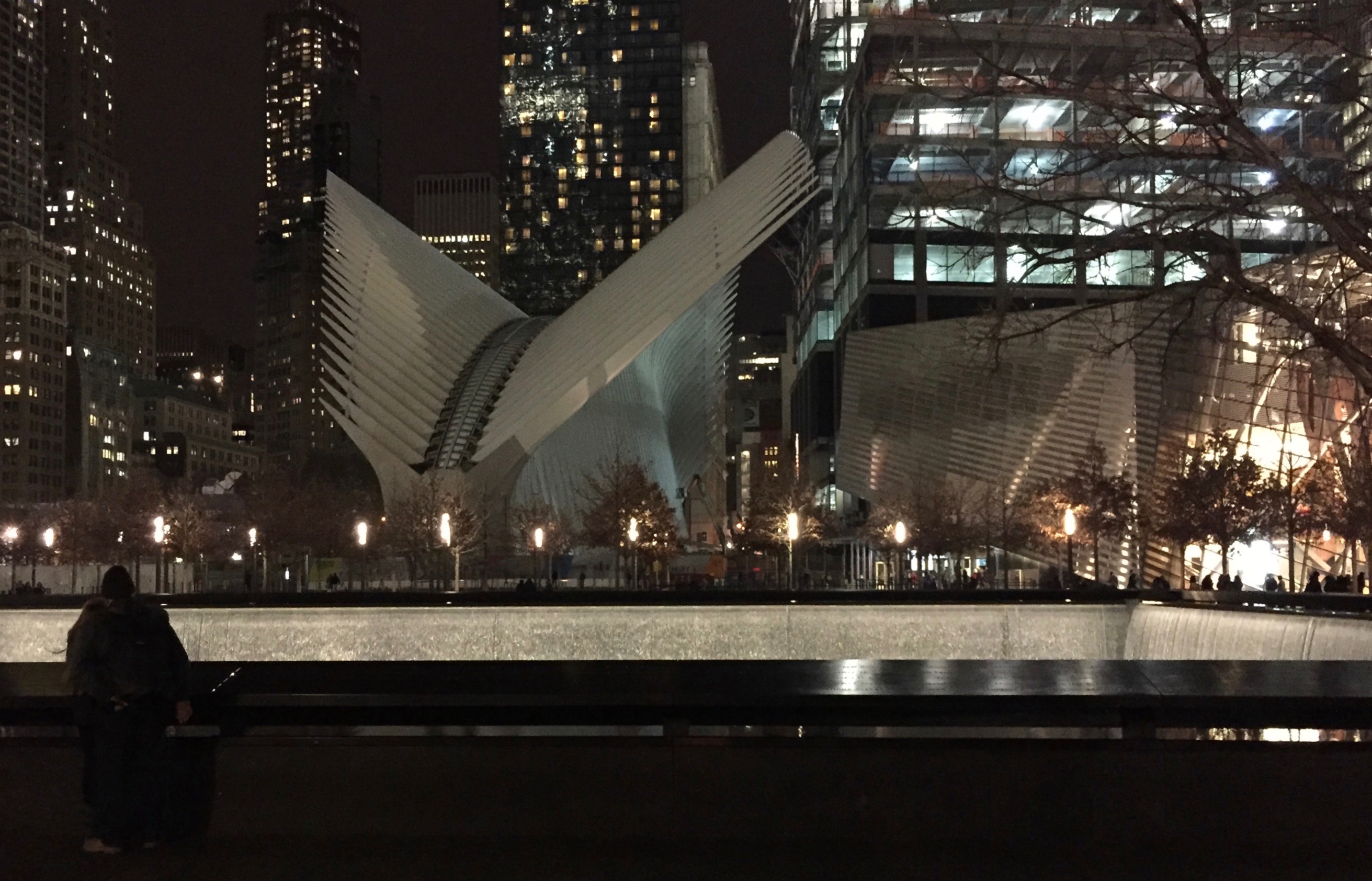 A few weeks before the opening of the new World Trade Center Transportation Hub, PATH invited journalists and members of the PATH Riders Council for a behind-the-scenes tour.

The new Transportation Hub is the fourth station to occupy the site. The first, built in 1909 as the Hudson & Manhattan Railroad’s Hudson Terminal, was replaced by a new station in 1971 under the original World Trade Center twin towers. After that station was destroyed on September 11, 2001, a temporary station opened in 2003. In October 2013, the West Concourse – the first portion of the new Hub – opened, connecting the Transportation Hub and Brookfield Place (formerly known as the World Financial Center). Platform A opened to regular PATH service in February 2014, followed by Platform B in May 2015.

When the Oculus, the Transportation Hub’s most visible above-ground element, opened in March 2016, it connected the PATH platforms with new entrances at 4 World Trade Center, and allowed construction crews to prepare for closure and demolition of the temporary entrance at Greenwich and Vesey Streets (a permanent entrance to the transportation hub at Vesey Street will replace the temporary head house).

The temporary station was the third to occupy the site.

The transportation hub will serve as a 21st century state of the art transit center in the heart of Lower Manhattan, now a thriving 24-hour business and residential community. The World Trade Center Transportation Hub will conveniently connect visitors to 11 subway lines, PATH, Battery Park City Ferry Terminal, the World Trade Center Memorial site, One World Trade Center, Towers 3 and 4 and a future Tower 2, and Brookfield Place. It will represent the most integrated network of underground pedestrian connections in New York City.

Every major architecture and engineering project in New York receives its share of criticism. The Hub, however, has become the subject of a competition among New York critics to outdo each other with ever more outlandish comparisons.

The hub has been decried by architecture critics as a “kitsch stegosaurus” and “a magnificent boondoggle” (in fact, no on can resist taking a swipe—David Dunlap, in this most recent article, describes it as looking “like a turkey skeleton after it’s been stripped clean at Thanksgiving”) but soon the public will be able to judge for itself, from the inside.

From the main floor of the Oculus, about 85 feet below ground, the view of the surrounding cityscape is unusually dramatic, and captures the momentum of renewal taking hold throughout lower Manhattan. In a place that bears a nearly unmatched complexity of history, tragedy, and meaning, even for New York, the Hub and the Memorial are the two spaces that most completely belong to the public. Where the Memorial signifies reflection and remembrance, the Hub’s role as a destination for transportation, commerce, and civic life represents the beating heart of Downtown.

The Port Authority’s World Trade Center Construction website notes that the main floor of the Oculus is 365 feet long, 90 feet longer than the main concourse of Grand Central Terminal. What those numbers can’t convey is the airy, cathedral-like atmosphere, with so much natural light that it feels unlike any other indoor space in the city. One can easily imagine a fashion show, food tasting, or holiday train show taking place on the main floor. During Spring/Summer 2016 New York Fashion Week in September 2015, fashion house DKNY staged what may be the hub’s first major event: a runway show in the West Concourse.

New York Post writer Steve Cuozzo, an often outspoken critic of the politics surrounding rebuilding the WTC site, notably softened his tone after seeing the reaction of close friends, and even conceded that critics–himself included–haven’t allowed themselves to appreciate the structures on their own merits.

It might take years for New Yorkers to fully embrace it, but the rest of the world isn’t waiting. Close friends who were my next-door Manhattan neighbors until they moved to Florida a few years ago recently set me straight.

“We came up out of the Fulton Street station and our eyes popped out,” said my friend, an acclaimed photographer who often returns to the studio he still keeps here but had not been downtown since when 1 WTC was a stump. “No matter what you guys write, everybody in the world is going to love it. Even the dinosaur.”

He means the Hub, which I’d ridiculed as the “Calatrasaurus.” And he was correct. Most of us fortunate to have a media voice liked some elements of the WTC project but not others. If public taste is any indication, we were all wrong about the ones we hated.

It appears that New Yorkers have already begun to let the Hub in to their daily lives. Erik Torkells, writer of the popular neighborhood website Tribeca Citizen, wrote a valentine to the Hub:

So let’s just stand back and admire the thing—a huge, white Venus flytrap that I find especially endearing when I happen to catch a glimpse of it from way up Church Street and Greenwich Street.

On May 26th, 2016, the Port Authority of New York and New Jersey held an event to mark the formal opening of the World Trade Center Transportation Hub, and the Dey Street connection to Fulton Center and the New York City Subway.

“Expensive? Yes. Controversial? Perhaps. But isn’t that true throughout the history of art? We must continue to recognize the importance of great public works, and the work of those who create them.” –Port Authority Chairman John Degnan

The WTC Transit Hub and Dey Street Connection between PATH and the New York City Subway are officially open!
Posted by Subway NY NJ on Thursday, May 26, 2016

This opening is a milestone because it marked the last step before closure of the temporary PATH station entrance at the intersection of Vesey and Greenwich Streets. That entrance closed at midnight on Sunday, June 26, 2016.

John Lanchester: There’s a romance attending on those jobs, the ones that keep things running all night long: it’s part of the fascination of big cities, the sense that something is always going on somewhere, even in the smallest of small hours. Bakers and police and nurses and cab drivers and market porters all belong…